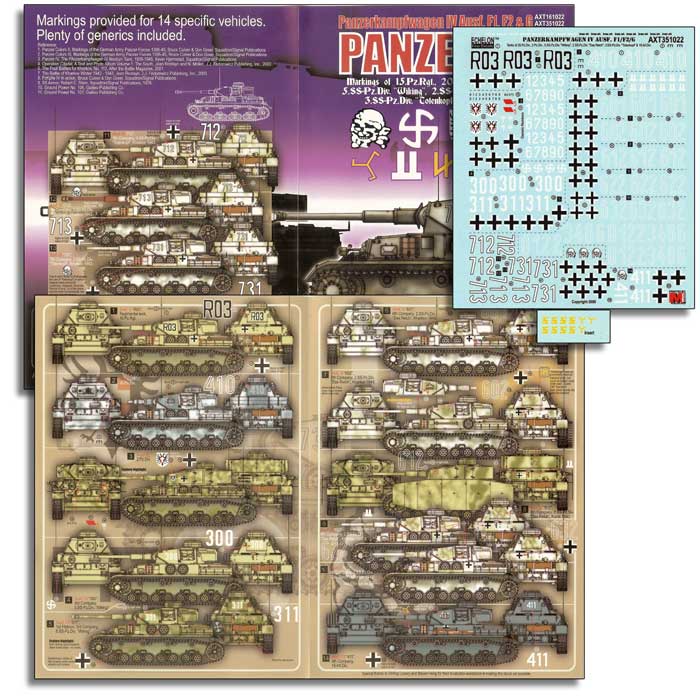 AXT351022
3.SS, 5.SS, 2.PD, 15.PR, 16.ID, 2.SS & 20.PD Pz IVs (Ausf F1/F2/G)
Ost front Panzer IVs? More coming of course, but for now, please feast on the known units that were fighting bitter battles at Kursk, Kharkov and other eastern fronts. First off, how about R03" from 15.Pz.Rgt? Quite a well-known tank whose image(s) have been published in several promiment references.
Next comes "410" from 20.Pz.Div., an interesting winter scheme to whet your appetite for wash-whited tanks, specifically an F1 model. Wide areas around the turret numbers (sides and back) are unwashed - so plenty of panzer grey in stark contrast against the whites! The divisional emblem in black, rarely seen this color.
More 2.Pz.Div markings, this time on an Ausf G armed with the longer Kwk40, L/48. Double-headed war eagle emblem captured to our best ability of course! What's interesting - a chassis number, red tactical rhomboid sign and the famous "Trident" emblem, all in one package.
Next, two "Wiking" Ausf. F2s with white turret numbers. The digit "3" has quite a unique look to it that typifies the number styles befitting SS units. By the way, these are Ausf. F2s without turret vision slots, not the regular version.
Now comes the "whopper" of the set - five Das Reich Ausf Gs. All fought on the bitter and cold Kharkov front except for "612" which was first seen at Kursk, namely "Operation Citadel". Lets not forget "602", a winterketten-fitted tank plus a newly discovered odd feature probably never seen before, the right side of the turret had a vision slot while the left side had none! (If you have seen such turret oddity on another Ausf F2 or G, please share!) All these plus a serious effort to cover all the known digits used by the 2.SS panzers during the Kursk and Kharkov battles. . All are the "broken" outlined types. You can't go wrong with these.
How can a Kharkov set for Ausf. Gs be complete without 3.SS tanks? Together with set AXT351016, you now have a wide range of markings and units catered to the Battle of Kharkov to choose from for your Ausf. G.
Last but not least, how often do you see a tank from the 16.Inf.Div. (Motorised)? Well here it is, turret numbered "411". While the "Wiking" panzers have their famous "sonnenrads" proudly presented, the 16.Inf.Div (Motorised)? The "trifoss" (three feet), this time in yellow! (Many thanks to Stirling for the interesting terms!)