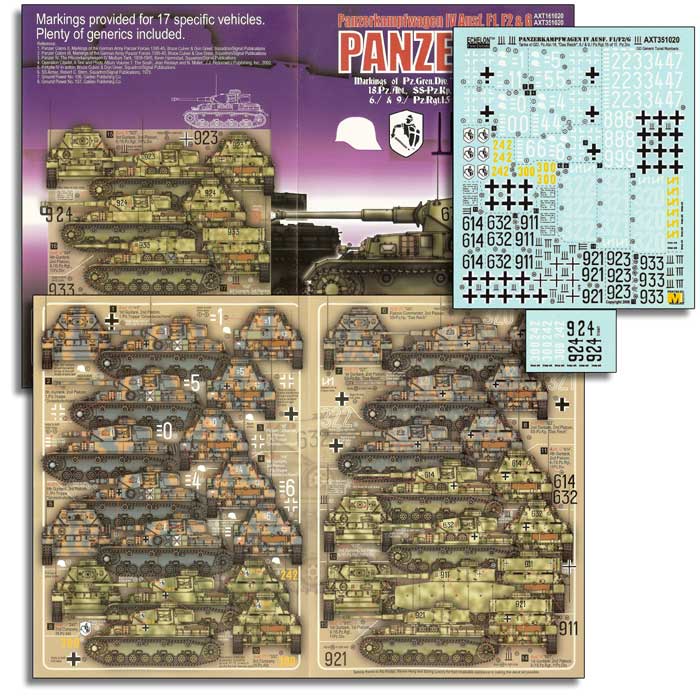 AXT351020
GD, 18.PzAbt, 11.PD & Das Reich Panzer IVs (Ausf F1/F2/G)
The first part of this set covers the famous Grossdeutschland Panzer IVs (Ausf. F1s & F2s). The promiment digits were not crudely hand-painted but clearly and very neatly applied (most probably stenciled).
While there is nothing new about the emblem of 18. Panzer Abteilung, research shows that the rear turret bins of the tanks also carried the marking. One photograph angle showed the turret numbers of a slightly darker shade than the whites of the Abt. emblem and the balkankreuz, hinting that the color could very likely be yellow. Nevertheless, a spare set of white numbers are provided if you're not fully convinced of the yellow. Either way, an all-out attempt was made to capture the emblem of all it's detail and shape.
Das Reich fielded F2 models, mostly likely in 2-tone truppen schemes, with the lighter earth tone sprayed over panzer grey in random wavy patterns. Tank "321", while exhibiting features of a typical Ausf F2 model, was without vision slots on the turret.
Lastly but not last, the well known 6./ and 9./ 15.Panzer Regiment Ausf Gs from 11.Panzer Division in their full glory. The divisional signs in two sizes, some neatly painted, some in "broken" stencil, and also a number crudely painted. The digits are so stylised that it's unmistakably theirs. Interesting enough, "911" featured early war balkankreuz even though it was fully skirted! On some of the turrets, the railroad stencils clearly painted. "924" was the "maverick" of the whole lot, insisting on having it's own stylised turret numbers.