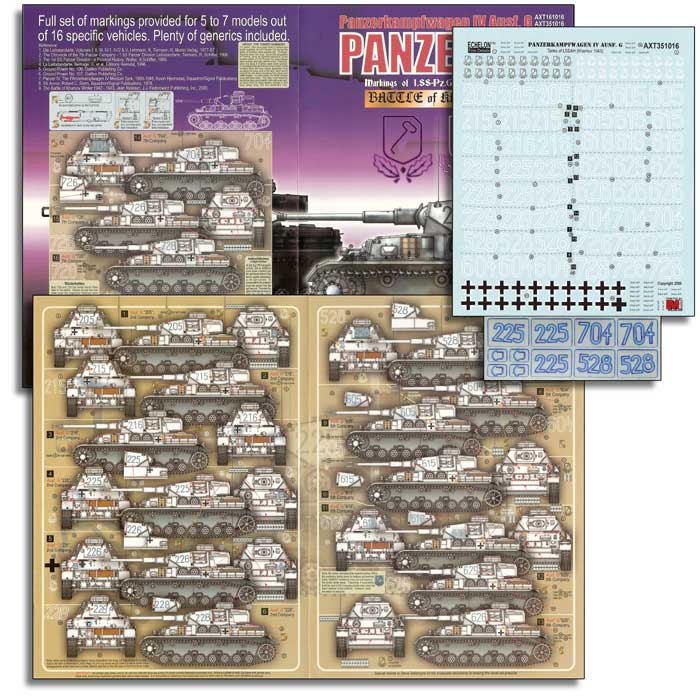 AXT351016
LAH Panzer IV Ausf Gs in Battle of Kharkov
The second installment of LAH Panzer IVs, this time featuring the Ausf Gs which took part in the intense fighting for the control of Kharkov. Previously mistaken as "red numbered" Ausf Gs, the solid "red" part proved to be the body color, which were not covered with temporary white-wash paint. In some cases, the white-wash near the numbers faded a little thanks to the harsh Russian winter, revealing clearly that the digits were actually white outlines and not solid. This evidence is also backed by a few examples which had the rear turret bins completed untouched by white wash as in the case of tank "528" and "704".
The Ausf G turret numbers were similar to the Ausf F1s and F2s that were stationed in France, as featured in set AXT351007. However, the similarity ended here, as the outlined numbers on Kharkov Ausf Gs were neatly free-handed and very differently styled, not stenciled. Each set of numbers was truely unique to each tank. This also means that AXT351007 and AXT351016 are not interchangeable, unless of course that accuracy is not of a great concern.
Together with a newer, simplified version of the "Dietrich" emblem both in white and black, this set attempts to cover the turret numbers of most of the Kharkov Ausf Gs ever photographed and documented in various books and sources. 16 vehicles in all, this set would be greatly useful to modellers who wish to recreate a more-than-one-vehicle LAH diorama depicting one of the most intense street fighting ever occured during second WWII. It would also allow modellers of stand-alone models a much greater variety of turret numbers depending on what reference they have access to.
It is totally "suicidal" to permanently print the solid part of the numbers with a fixed body color such as panzer grey as nobody can be completely sure of the base color of each tank. Even though a great majority of the tank were thought to be panzer grey underneathe the whites, a few of them looked like dark yellow (quite possibly with dark green or red brown overspray). Therefore, to be on the safe side, the numbers in this set were printed in white outlines, following closely to the real examples. This permits the modellers the greater flexibility of choosing their own base color before applying the decals next, and lastly applying the white-wash carefully. The mentioned procedure was how the real vehicles were done, actually. This of course, means the lesser experienced modellers will have a greater challenge in applying the white wash. To circumvent this, a small paint mask sample is provided, covering three of the more interesting vehicles. Modellers can now paint the prefered body color first, mask out the numbers and spray the white wash before applying the decals last. Alternatively, they can also paint the white wash first, mask out the numbers with the "negative" part and spray the body color before applying the decals finally.
Masks for all marking options could not be provided in this set due to very obvious cost reasons.
Upate (5/17/08): for the rest of the vehicles' number masks see also: D356036; D356037; D356038; and D356039.