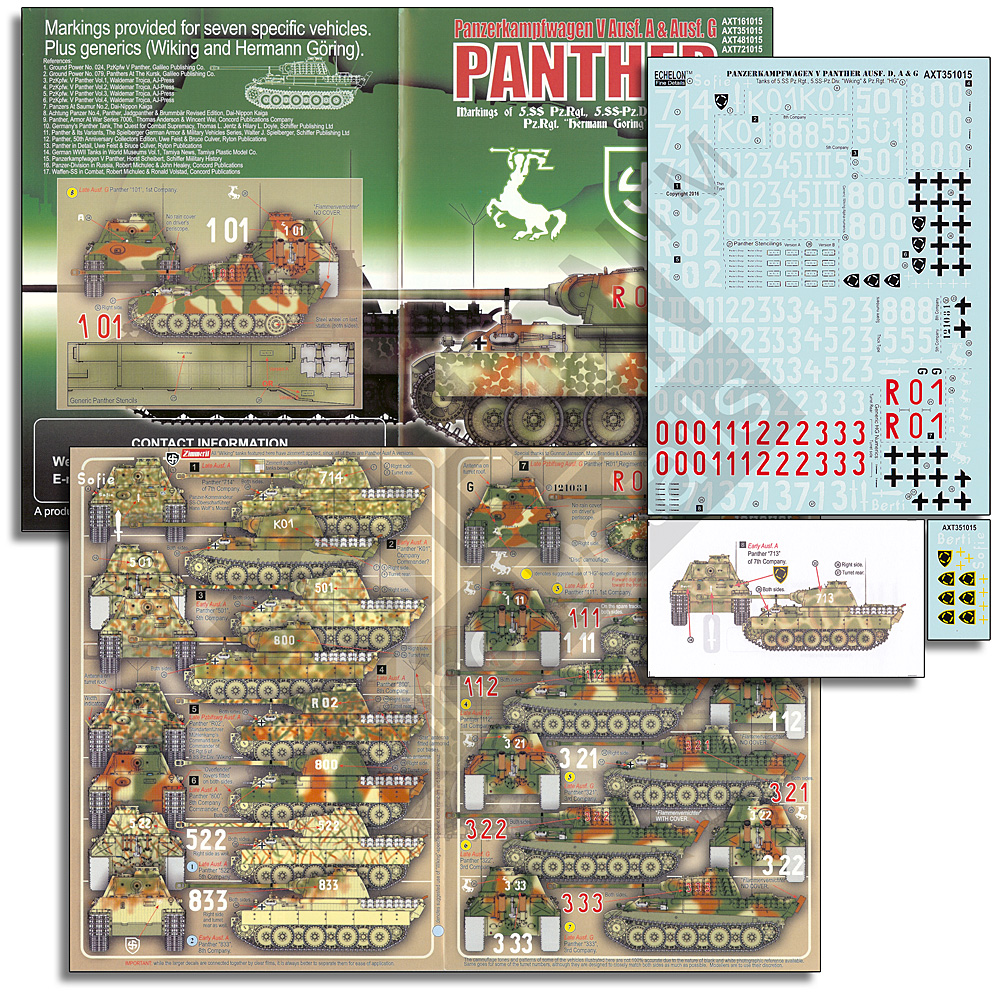 AXT351015
Wiking & Hermann GÃ¶ring Panthers (Ausf As & Gs)
Wikings galore! All the possible number styles used by the Wiking Panthers fighting in the eastern front campaign! The numbers and balkankreuz have received hand-painted effects on the edges. The alpha-numerics are given in two distinct thickness. Now you should be able to build any Wiking panther you wish, even those out of this set!
Wiking-specific marking options feature two well-known vehicles, SS-OberscharfÃ¼hrer Hans Wolf's mount "Sofie" or "714", and StandardenfÃ¼hrer MÃ¼hlenkampf's "R02". It is an all-out attempt to get the markings on both vehicles (as well as the rest) to be as precise as possible given the references available. The type-face of "Sofie" is accurately captured, and not forgetting the "sword" emblem on the frontal hull armor as well. There are various versions of Wiking emblems provided in the set. You'll find good use of those on other vehicle types in the Wiking's inventory. And since we are on the subject of "sun-wheels", we included Nordland emblems into the set as well.
The second part, although of a smaller area, but just as significant are the Hermann GÃ¶ring Panthers numerics and the "Centaur" embem in two sizes. Most of HG Ausf Gs were of the late war configuration that come with chin mantlets (or without), crew heater fan, flammenvernichter (with or without cover). Of all the HG Panthers featured in this set, not one is exactly the same! One Panther in particular, "101", had the last station fitted with steel wheels! The turret numbers are also quite unique that the rear turret numbers are solid white (apart from "R01"), while the sides are red with white outlines. Also, the numbers on the sides are painted over the spare tracks, which
Also included and often omitted from many Panther decals are the stencilings found on antenna tube casing and the left hull sides.
(Added in 2016 reprint: Added "713", an early Wiking Panther A, alternate colours for the unit symbols included.