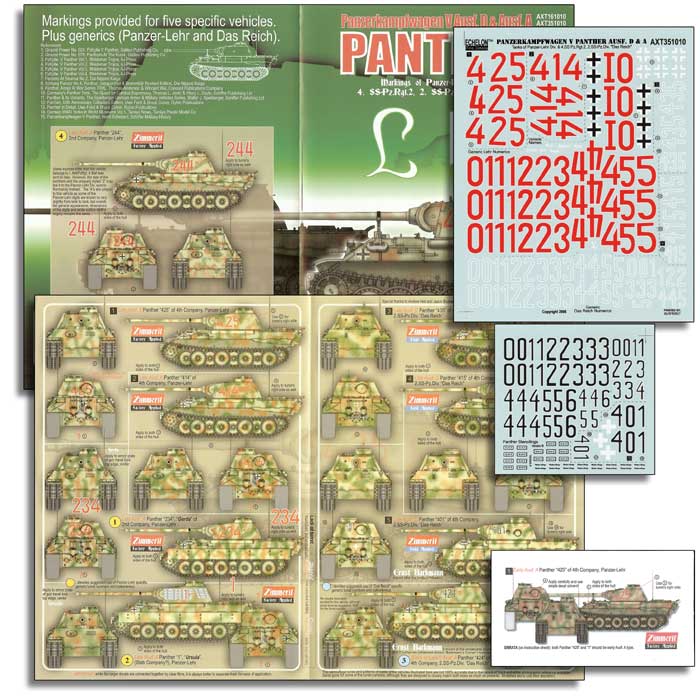 AXT351010
Panzer-Lehr & Das Reich Panthers (Ausf Ds & As)
This sheet is an attempt to cover all the alpha-numerics used by the well known Panzer-Lehr and Das Reich Panthers.
The main trouble faced during the production of this marking set is the fact that there aren't a lot of "useful" information covering the two famous Panther units. However, upon closer examination of the available but useful data, they are enough to determine the discernable patterns of the alphanumerics used by the two units. As such, may Echelon Fine Details be bold enough to suggest that this sheet would allow modellers to mark most (if not all) of the Panthers (Ds & As) of the intended panzer divisions.
If you look closely, these aren't just any generic panzer alphanumerics offered out there. The digits utilised by the Panzer-Lehr Panthers feature really thick inner reds outlined by really thin whites (not quite visible in scan on the left). Also, every nook and cranny of the unique digit styles are captured so they are immediately identifiable as Panzer-Lehr turret numbers! Same goes to the Das Reich alphanumeric styles - as all of them are hand-painted and have a certain discernable size and irregular (but unique) pattern to them - probably by a single artist.
One of the main highlights of this sheet is the personalised names found on some the Panzer-Lehr Panthers during the Normandy / Normandie Campaign. So far only two of the names can be associated with full turret numbers: "Gerda" & "Ursula". While the turret numbers of "Ingrid and "Christel" could not be found. Just the same, they are also included, with the hope that the associated turret numbers will one day surface.
The second highlight of this sheet is the two Ernst Barkmann vehicles. One is a late Ausf. D and the other an Ausf. A ("Barkmann's Corner", in Normandy). Together with two other DR panthers, they make up the DR lot featured in this sheet.
All in all, a very tough marking sheet to produce, but hopefully a really useful sheet to fans of Panthers and the two Panther divisions out there.
(Added in 2008 reprint: two more names, generic Lehr emblem and vehicle stencils)