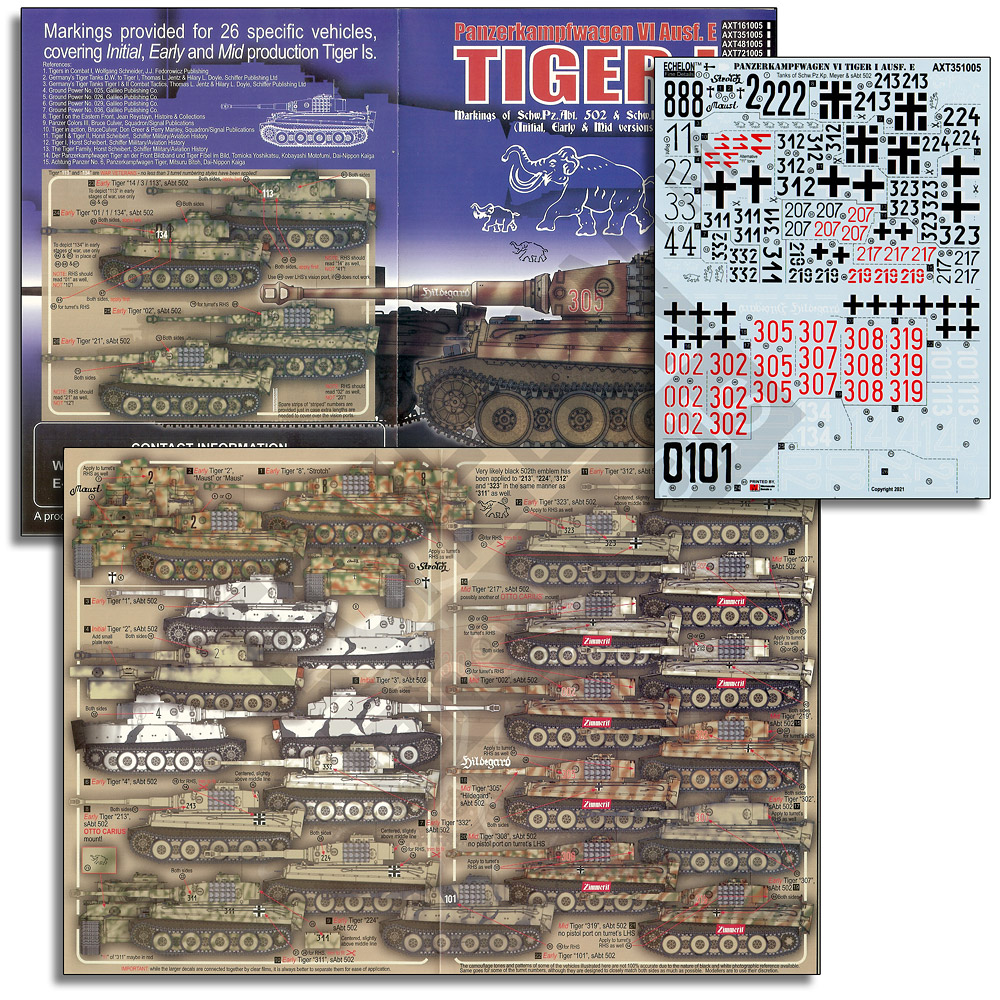 AXT351005
Schwere Panzerabteilung 502 & Schw.Pz.Kp. Meyer Tiger Is
Markings for a whopping 26 specific vehicles!
Starting with Schwere Pz.Kp. Meyer Early Tigers, there are two known vehicles with personalised names across the frontal hull armour. The vehicle numbers were also very unique to these tanks, being very narrow and tall (yes, the "8" is really THAT narrow). This is consistent with the Tiger "2" number as well. Together with the white shield and black cross on the lower front hull, these two will make an interesting and colourful pair in a diorama.
The second part, also the primary focus, of this decal sheet covers the very diversified markings and camouflages used by the 502 Tigers. Being the first ever heavy battalion to employ Tiger Is, it received almost every production types minus the late and final versions. Tiger "2" (and very likely "3" as well) were Initial types.
Tiger "311" has been quite an intriguing vehicle that I'm almost quite certain the "11"s were of a lighter shade than the "3"s, this visual information didn't just come from only one view of the real beast. Given that "311" was the first vehicle of 1st platoon, it may (or may not) have received special treatment to its numbers. I leave it to modellers to exercise their discretion on the exact shade they want. Also, almost oblivious to many, the rear bin numbers of "213" (Otto Carius's mount), "224", "311", "312" & "323" are larger than the turret and hull side numbers.
Some of the turret numbers in middle have quite a difficult colour shade to decipher, so both red and black shades were provided.
Of the red with white outline numbers, Tiger "305" received a personalised name on the LHS of the barrel sleeve - "Hildegard".
Lastly, of special mention are the "veteran" Tigers at the bottom of the sheet. Two of the vehicles received no less than 3 different styles of numbers! Also, the white outlined with inner stroked numbers are also very unique to 502. Added to that, the stroked lines in the numbers seems to go only in a bottom-left to top-right fashion, both sides!
From the decal image, one can see that there are 4 distinct marking styles used by the 502 Tigers during the eastern front campaign. 6, if you break down the lower portion of white solid and white outline with inner finely stroked numbers!