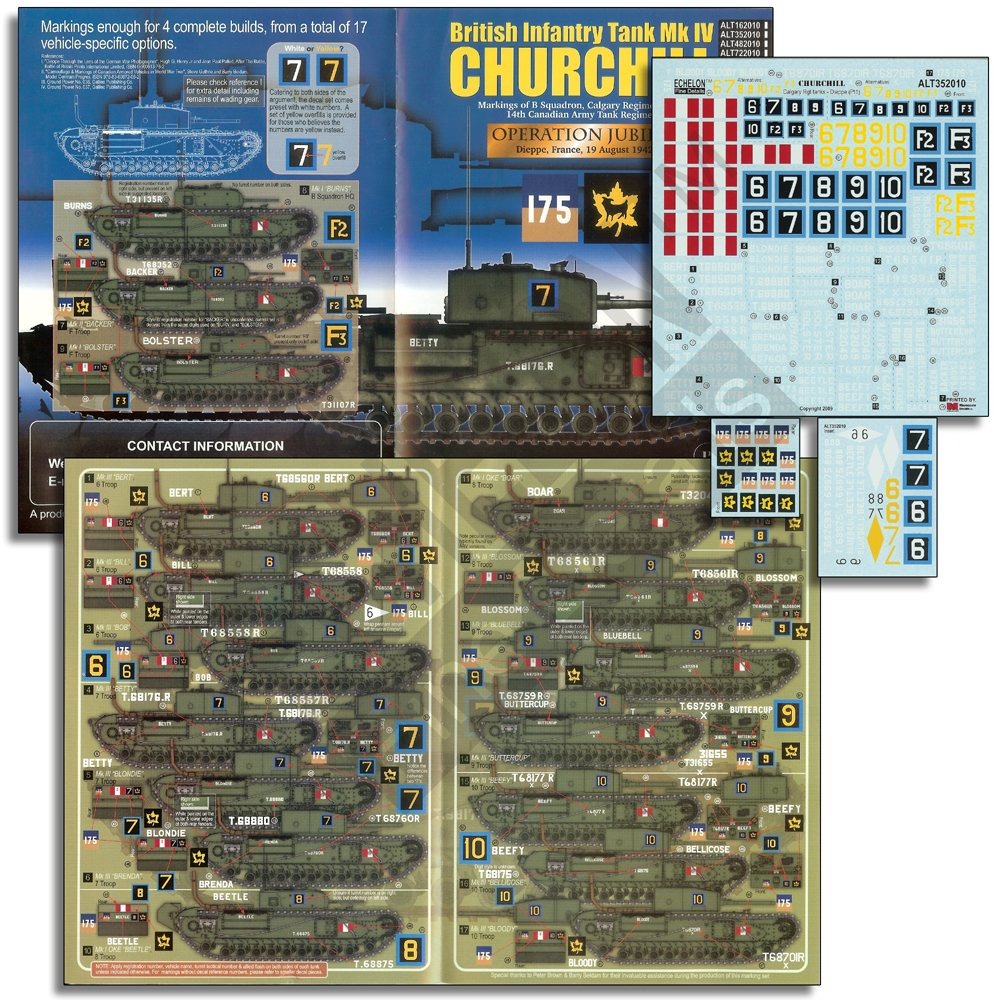 ALT352010
Calgary Regiment Churchills in the Battle of Dieppe (Pt1)
Part I covers all the tanks of B squadron. Upfront, it was an extremely difficult set to produce. Given that there is already a few very good references at hand, one could still not find all the angles of a single vehicle needed to be be completely sure that nothing is missed.
Keep in mind that of all the allied AFVs so far, the Dieppe churchills are armong the most prominently (and numerously) marked tanks to date. To give an example, BERT alone has 18 markings by itself! And that's just about the average number of markings on each vehicle, give and take a few. To make things worse, the typeset used for vehicle names and registration numbers varied greatly between tanks. It's not just two to three fonts, I've already lost count how many there were! All painstakingly captured down to the finer details given the best references one could get their hands on.
On the topic of colours, there have been two camps on the tac numbers. White or Yellow? To satisfy both, the set comes with white numbers, together with the optional yellow fill-ins. The reason why white cannot be the fill-ins and the yellow cannot be the preset is simple - yellow will bleed through white how strong the latter paint is. Whereas, yellow will have no problem with white underneathe (which is natural where decal production is concerned). So, my apologies to the "Yellow tac number" followers. A little inconvenience will be expected on your part to manually place the yellow fill-ins over the whites.
Next comes the AOS colours, it has been said that Dark Blue over Dark red are for the Artillery branch in the Canadian AOS rule book, thus they are not possible on the Dieppe Churchills. Tan was used instead, and Barry Beldam of the famed Armoured Acorn provided the RGB composition (translated to Pantone numbers). Thanks Barry! Just in case one begs to differ on this, the white AOS numbers have also been provided separately (top corners of the sheet).
The set is good for 4 complete builds, out of a whopping 17 options provided and over 4 different Churchill marks (I, II, III and OKE). Now is this set complete? Nope, sadly I do not have details of BULL, or else it would have been complete.